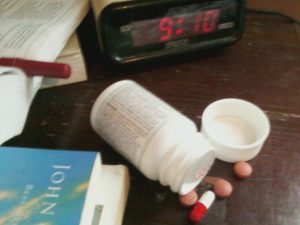 This is part two in a series. The first article talked about over the counter meds that pose a hazard to your pet. This post lists several prescription medicines that need to be kept out of paws’ reach.

Do you take prescription drugs daily? Do you keep that medicine in an obvious place like the night stand or a kitchen counter so you don’t forget? These same drugs that radically improve lives can be deadly to pets if the medicines are accidentally ingested. Here’s a list of drugs to keep out of reach of naturally curious cats and dogs:

1. Methylphenidate (for ADHD) is a stimulant and can dangerously elevate heart rates, blood pressure and body temperature as well as cause seizures in your pet if it’s ingested. Because an ADHD child isn’t likely to remind his parent he needs this drug, it’s highly likely that this drug may be kept in an obvious place to nudge everyone’s memory. Be sure your obvious spot isn’t pet accessible.

2. Fluorouracil, an anti-cancer drug, is used topically to treat minor skin cancers and solar keratitis in humans. It has proven to be rapidly fatal to dogs, causing severe vomiting, seizures and cardiac arrest even in those who’ve chewed on discarded cotton swabs used to apply the medication. Be sure your trash can isn’t pet accessible!

3. Isoniazid, the first line of defense against tuberculosis, is particularly toxic to dogs because they don’t metabolize it as well as other species. It can cause a rapid onset of severe seizures that may ultimately result in death.

4. Anti-diabetics drugs can also cause major problems. Many oral diabetes treatments-including glipizide and glyburide-can cause a major drop in blood sugar levels of affected pets. Clinical signs of ingestion include disorientation, lack of coordination and seizures.

5. Amphetamines (like Adderall) stimulate the central nervous and cardiovascular systems. If your pet manages to ingest enough, he may experience hyperactivity, seizures, fever, abnormal heart rate and rhythm, coma and even death.

6. Nicotine Patches are great product for you – but dangerous for your pet. For your dog or cat that ingests an anti-smoking patch, this product has the potential to produce severe vomiting, depression, elevated heart rate, drop in blood pressure, seizures, respiratory failure or in severe cases, death.

7. Amoxapine and Clomipramine hydrochloride are from the most common class of antidepressants. These psychotropic drugs are dangerous for several reasons. For one, they are rapidly absorbed into the bloodstream, and manifest milder symptoms like lethargy in as quickly as 30 minutes. Secondly, these milder symptoms can quickly progress into vomiting, vasodilation (widening of blood vessels), slowing of the heart, seizures, coma and death.

8. Baclofen is a muscle relaxant that can impair the central nervous systems of cats and dogs. Some symptoms of ingestion include significant depression, disorientation, vocalization, seizures and coma, which can lead to death.

9. Vitamin D derivatives strengthen the bones of individuals who may suffer with osteoporosis. If ingested by your pet, the danger signs may not be immediately evident. Even small exposures to Vitamin D analogues like calcipotriene and calcitriol can cause life-threatening spikes in blood calcium levels in pets. Clinical signs of exposure-including vomiting, loss of appetite, increased urination and thirst due to kidney failure-often don’t occur for more than 24 hours after ingestion.

Again, child-proof does not mean pet proof! Watch for falling pills, and don’t forget to take out the trash. And if you think your pet has ingested one of these drugs, call us right away. We’ll evaluate the situation, and do what it takes to keep your wonderful pet healthy and happy!

When you’re sick, it’s easy to leave your medicine on a bedside table or on the kitchen counter. Maybe it’s so you don’t forget the next dose, or maybe it’s because your pounding headache blocks every other thought. At any rate, over-the-counter medicines that cure you could kill your pet. Here’s a list of 7 common medicines to keep out of paws’ reach:

1. Aspirin. Even baby aspirin can be lethal to your pet. Although some vets may prescribe buffered aspirin in low doses, an overdose of aspirin may result in aspirin poisoning which means gastric irritation or ulceration, bleeding problems, seizures or liver damage.

2.Pepto Bismol. Contains bismuth salicylate which is similar to what’s in aspirin. Although this may be prescribed by your vet at appropriate doses, an overdose could result in effects like that of aspirin poisoning.

3. Kaopectate. New formulations of this medicine contain salicylates which may also cause effects like aspirin poisoning.

4. Ibuprofen. It’s great for your headache, but even in small amounts, it can be toxic to your pet. Depending on the dose, Ibuprofen may cause significant gastrointestinal damage or kidney damage.

5. Pseudoephedrine. This stimulant designed to alleviate your congestion can result in elevated heart rates, blood pressure and body temperature as well as seizures for your pet if he ingests it.

6. Vicks Vapor Rub. This salve contains essential oils like camphor and eucalyptus that potentially may produce gastrointestinal upset and central nervous system depression. If enough of this is aspirated or inhaled, your pet could experience respiratory irritation or even pneumonia.

7. Fennel, Omega Three Supplements, Vitamins and Other Supplements. All these products are meant for human consumption – not your pet’s. Don’t give any medicine or supplement (especially those designed to be for humans) to your pet without consulting your vet.

IMPORTANT!! Remember that child proof tops aren’t pet-proof! Your dog or cat can easily chew the lid of anything they’re curious about. Keep medicines in a high cabinet for your pet’s safety. Watch for spills; dogs especially have a tendency to gobble up any brightly colored pill rolling their way.

And if it happens – if Salome absconds with your pill case or Napoleon beats you to that runaway capsule? Give us a call right away. We’ll advise you on the best course of action to take.

PS And we hope you’ll feel better soon, too! 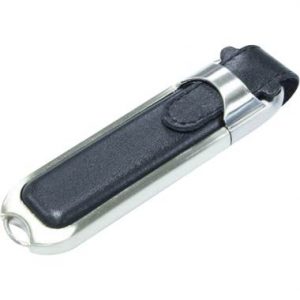 “All of a sudden our dog keeps scooting her butt across the carpet. It’s disgusting. What’s going on!?”

1. Your dog scoots his rear end across the floor or ground.
2. Your dog continues to lick or bite at her rear end.
3. Your dog’s stools are soft and mushy.
4. Your dog’s rear end has a fishy odor.

2. What’s the brown liquid for? Your dog expresses or releases a little bit every time he poops and also every time he meets another dog. Think of how dogs always sniff each others’ rear ends when they meet. To them, it’s as natural as kissing cheeks in Paris or shaking hands in Dallas. The chemicals released in that smelly brown liquid answer every question a dog may have about the new (or not so new) mutt on the block. Male? Female? Is she in heat? Is she pregnant? Inquiring dogs want to know!

This also explains why your dog can’t pass by dog poop without sniffing when you two are out for a walk. To you, it’s a disgusting pile of poop. To your pet, it’s a thumb drive of information.

4. Is this something we need to have done for our pet every month? Talk to us about your pet’s case, but In most cases, no. Most pets can do this routinely without human intervention. If expression is done too frequently, pets can lose the muscle tone to do this for themselves. 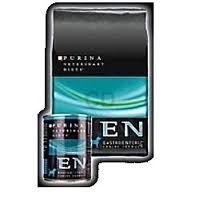 Remember, the EN formula is recommended to be a part of your pet’s first aid kit – for those times when your pet has an upset stomach. If you haven’t assembled a first aid kit for your pet, this special makes it a great time to start! 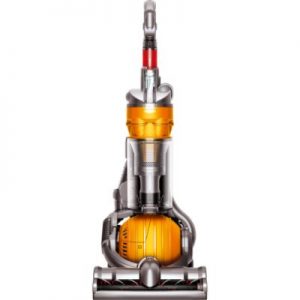 This just in: Sadie and Sophie, two beautiful Westies, have been coming to Town ‘N’ Country for years. They have an exceptional mom named Lorene, who even brushes their teeth regularly!* Sadie and Sophie’s cousin Chester also visits us here at the hospital. If you remember, back in June, when you bought Sentinel heartworm and flea prevention medicine, you were entered into a contest to win a Dyson DC24 vacuum cleaner – and Lorene won! She’s now having much more efficient results cleaning up after Sadie, Sophie and Chester. Congratulations to the whole family!

By the way. Do you brush your pet’s teeth regularly? Take the poll on Facebook!