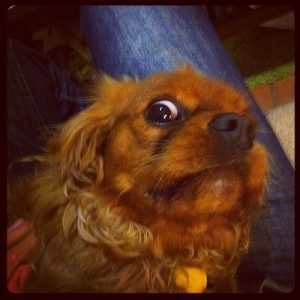 No, you’re not the only one shocked by the price of a dental cleaning. More than one customer has pointed out to us that cleaning the pet’s teeth costs more than cleaning their own teeth.

Contrary to what you’ve imagined, your pet’s dental bill payments don’t go into a Swiss bank account or purchase a luxury home on the French Riviera. Your cat’s or dog’s cleaning cost more because:

1. You probably go to the dentist more often. Your visits are scheduled every six months, so you have less tartar in your mouth than what your cat or dog exhibits. Most people don’t bring in their pet for a cleaning unless they can see tartar or signs of periodontal disease.

2. A neglected mouth needs more attention. Full mouth radiographs are routinely done at each visit. Scaling, polishing and charting each tooth takes a bit more time than you might anticipate.

3. To clean your pet’s mouth properly, anesthesia must be administered. We have to do this in order for the vet or vet tech to thoroughly examine and complete necessary procedures. If you’d like to read more why anesthesia is best for your pet, click here.

But look on the bright side. This month, for a limited time, receive a free Rin Tin Grin bag when you bring in your furry baby for a dental appointment. February’s dental health month, and we would love to see you and your pet very soon.

At Town N Country, questions about cleaning a pet’s teeth come up frequently. Ads for “sedation cleaning” or “sedation dentistry” mislead and confuse pet owners. Trying to clean an animal’s teeth without anesthesia presents many problems, which is why the American Veterinarian Dental Society (AVDS) considers such a procedure malpractice.

Your pet is much better served (and healthier too) when she receives a professional cleaning using anesthesia. Take a look at five things you will not hear during a cleaning at Town N Country.

1. “Just relax, Buster. Now spit.” When’s the last time your pet spit on command? Aside from prepping your pet for a procedure he truly doesn’t understand, a veterinary hygienist needs to protect the animal’s airway. Keeping debris and fluid out of the lungs of a panicked pet would be impossible without anesthesia. (Think about how many times your mouth was suctioned during your last dental cleaning.)

2. “Raise your right paw if this starts to hurt too much.” An animal in pain doesn’t react the way you and I do. A thorough cleaning means cleaning below the gum line where tartar and bacteria often develop. A sedation cleaning might manage to clean a pet’s teeth above the gum line, making teeth appear whiter; however, very significant problems could still lurk beneath the surface.

3. “Did I tell you that you get a biscuit when this is over?” A professional cleaning takes time because it does more than clean. The veterinary hygienist’s tasks include charting, radiographs, scaling and polishing the teeth. These tasks would be impossible to perform on an alert, frightened animal, no matter how many reward biscuits you promised.

4. “I do this all the time. Really.” There’s a good reason AVDS calls sedation dentistry malpractice. The people who administer this process are often not trained in dentistry or veterinary procedures. For the safety and well-being of your pet, only a licensed veterinarian or a supervised and trained veterinary technician should provide dental services.

5. “OUCH!! $%#@!!!!” At Town N Country, we’re also concerned for the safety of our staff members. No one wants to have hands inside of an easily roused animal’s mouth or within scratching distance of active paws with claws.

You want the best for your pet – that’s why you ask questions about procedures. At Town N Country, your questions are always welcomed. With a little help, your pet’s good dental health can lead to a long and healthy life. 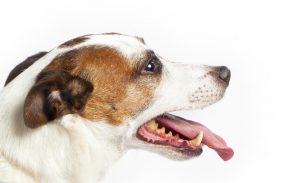 Could your dog’s bad breath….

No joke – your pet’s dental health deserves serious attention. No matter what you’ve been told, doggy breath shouldn’t be synonymous with bad breath. A healthy mouth means gums look pink (not red or purple) and there’s no foul odor. Bad breath can be an early sign for infection.

Just as your own health can be compromised by periodontal disease, your pet’s dental infections can lead to problems with her heart, liver and kidneys that can consequently result in a shortened lifespan.

Take a closer look in your pet’s mouth. If you can find tartar accumulation or see red or purple gums, it’s time for a cleaning. Or if Barney’s breath is something the whole family avoids, it’s time to give us a call. 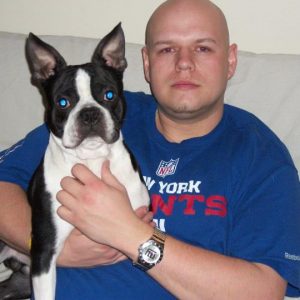 Tuck and his dad

We wanted to share this heartwarming story with all our Facebook friends. A few weeks ago, we started our day meeting a Boston Terrier named Tuck. Tuck was a bright-eyed, big-eared 5-year old that woke up one morning and couldn’t use his right leg. By the next morning, all 4 legs were paralyzed and he could barely raise his head. Because he was paralyzed, he couldn’t get in a position to eat or drink or go to the bathroom.

When I met Tuck he was laying on his side, with no attempt to move. After our exam, we suspected he had granulomeningoencephalitis (GME) which is an immune mediated type of encephalitis that can affect dogs causing varied but sometimes widespread neurological signs. It was recommended that he be seen by a neurologist for an MRI and CSF tap.

Unfortunately, those advanced tests were too costly. We counseled the owner to consider treatment for GME even though we couldn’t be 100% certain that’s what he had without a CSF tap. He needed immunosuppressant therapy that could get quite costly over time. The owner consented knowing that if this didn’t work, they would have to put Tuck to sleep. 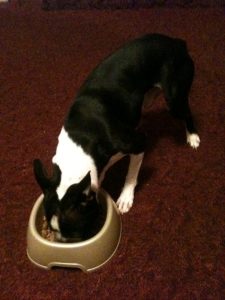 Tuck’s Angel The owner’s employer’s heart was so moved by Tuck’s dilemma that they paid for some of Tuck’s test and treatments. A few days later Tuck was able to move one leg, but just barely. The owners again were afraid they were going to have to put him to sleep. The physical therapy and supportive care he was requiring was wearing them down.

We persuaded them to wait for at least the medications to have enough time to see their full effect. We would even take care of his physical therapy/supportive care during the day while they were at work.

We just had a feeling Tuck wanted to get better. After a few more days, one back leg was working better. On Sunday we received the post showing Tuck standing on his own with his head in his bowl. We were elated to see that Tuck was continuing to improve.

Tuck has been a great, great dog to work with. He never says a word with anything we have to do to him and he’s always a willing participant in his therapy. We are all working for him to get him back to function again, but he’s working the hardest.

Keep up the good work Tuck! We are all cheering you on!