You are here: Home / Healthy and Happy / Nothing Scarier: RABID ZOMBIES 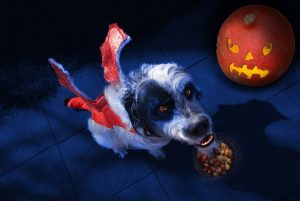 Horror stories abound at Halloween time, and kids and adults alike are thrilled with make believe scariness that is totally fun. Rabies is a scary story that sounds like a zombie film. But the really frightening truth is that it’s not make believe, and isn’t fun at all. Transmitted by other rabid animals, rabies is a painful killer. Even worse, the disease is zoonotic, which means it can be passed to humans. Are you scared, yet?

The Scary Words. he medical term for rabies is “hydrophobia”, which means fear of water. In the latter stages of rabies, the victim chokes on any liquid. The word “rabies” itself comes from the Latin word for madness. Because it affects the central nervous system and brain, this disease progresses fairly quickly with the following symptoms:

The Scary Symptoms. The initial symptom is that the animal will show shyness and withdraw from people – including owners. He may also lick the site of the original bite wound. The disease progresses, the animal becomes very aggressive. There may be foaming from the mouth because of difficulty swallowing. Later, paralysis and breathing difficulty will lead to a painful death.

The Scary Carriers. Watch out for wild animals that are likely candidates to pass on rabies to your pet like raccoons, skunks, bats, and foxes.

Stop the Scariness! Rabies is a very serious disease that can be completely prevented with regularly scheduled rabies shots or boosters. Maybe associating a scary disease like rabies with a scary holiday like Halloween will help you remember your pet’s shots.

If you have a puppy, arrange for rabies shots when your pup is between the age of 14 and 16 weeks. That first vaccination is good for a year, and boosters should be administered every year for cats (read more about rabies vaccines for cats), and every three years for dogs.

If your pet’s shots aren’t up to date or you’re not sure about your pet’s vaccine schedule, give us a call. One quick appointment will scare proof your pet during Halloween – and the rest of the year.