You are here: Home / Healthy and Happy / Reunited: A Dog’s Tale with a Happy Ending 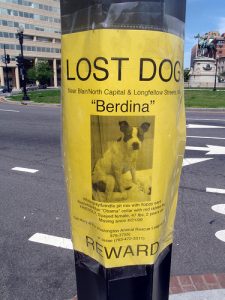 Bella’s family loved to spend winter months in Florida and summer months in North Carolina. One sunny day in Florida, Bella and her papa were walking along when a particularly feisty Floridian squirrel stole Bella’s attention.

Although Bella was usually a level-headed Golden Retriever, she temporarily lost her head and bolted while a stunned papa frantically shouted her name. The squirrel turned left, then right and three streets later, Bella was out of earshot and away from anything that smelled familiar.

After their best efforts to find Bella proved unfruitful, her parents returned home emptyhanded and heartsick. Unfortunately, Bella was hit by a car within a few hours. Fortunately, a “good Samaritan” found her and rushed her to the local emergency vet hospital.

As doctors cared for her, they discovered the identification microchip that her parents arranged at Town N Country Animal Hospital when she was a puppy. Although she had never been officially registered in Florida, staff members traced the number to Town N Country and Bella’s parents within 24 hours.

Bella had a successful surgery and was very, very happy to see her parents again.

Is Your Pet Microchipped? In an imperfect world of distracting squirrels, unsavory characters and pets appropriately named “Houdini,” microchipping remains the safest, most dependable method of identifying a pet that’s lost its way from his owner.

How is it Done? A topical local anesthethic is applied between the pet’s shoulder blades. The needle is about the size of what’s used on humans when they donate blood, and a spoonful of peanut butter or other preferred treat serves well as a distraction.

When is it Done? Many breeders have puppies microchipped with their first set of shots while some pet owners elect to do this when their pet is spayed or neutered.

What’s the Result? This is how you write your own happy ending should your pet get separated from you. Microchipping protects your pet and gives you peace of mind.

To schedule an appointment to microchip your pet, call us today.