You are here: Home / Our Pets / Kenzie – the Lost and Found Story of a Rescue Dog 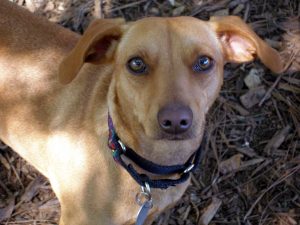 My Kenzie was a rescue pup and I got her 8/24/2010. We think she’s part dachshund and part Italian greyhound. We think she’s about 3 years old now. She weighs about 25 lbs. On a December Saturday, we were visiting, for the first time, new friends who live an hour away and we all went for a walk in the woods. It started to snow and the dogs wanted to run.

Thinking Kenzie would stay with the other dog, I let her off her leash. She ran away and came back twice with the biggest grin on her face. The third time they ran away they did not come back.

We went back to the house and the other dog had returned but Kenzie had not. We walked and drove and yelled but did not see any sign of her, and the temperature dropped to 19 degrees that night. I was heartbroken and panicky.

The next day I went home and started researching how to find a missing pet. I hired a tracker (he and his dog did their thing on Monday but did not find her), I contracted with a company to make robo-calls to local households, we made signs and hung them and I even consulted a pet psychic.

No immediate results. On Thursday, 5 days later, I got a call from a man telling me he had seen the signs and he had seen her that morning. I left work and made the hour drive, heart in my throat.

Once I got there I spent a very chaotic hour and a half looking, calling, answering several more calls from people who had seen her, running back and forth across this busy 2-lane highway, lugging a bag with leash, food and water. Finally, I got a call from a man saying he was looking at her right then…back across that highway.

A woman who had stopped her car to help me drove me to the spot and within 5 minutes Kenzie was in my arms, licking my face. She was in remarkably good shape, Dr. Bolynn told me later that afternoon when she examined Kenzie. My boss and a good friend brought toys, treats and a bottle of wine to my house that night!

If it weren’t for the kindness of strangers, who all also know the love of a good dog, I don’t think Kenzie and I would have celebrated our first year together like we did a few weeks ago. And, shhhh, she’s one of Dr. Bolynn’s favorites…or maybe she says that to all the dog moms! 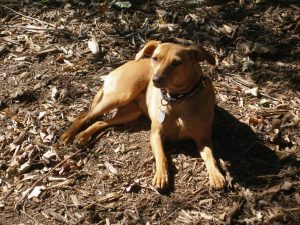 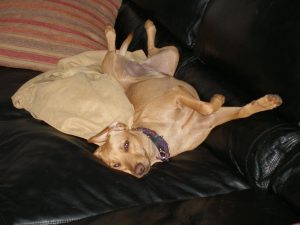